Confession:  I have a new obsession.

It has literally taken over my life.  So much of my free time (and money) has gone into the genealogical hunt for ancestors.  Who knew finding long lost family can be so addicting.

I’ve come across some very cool information (some not so cool) and made some very neat connections.  The best part is, I’m not even close to being finished.  I may never be finished!

One regret is I wish I wrote down more of the stories my mom and grandparents told me.  I can only remember snippets of some of them and other stories are lost forever, I’m sure.

I’ll get into some of my neat finds in future posts.

On that note, I can do lookups in the following books for anyone who’d looking for connections to the past in Gull Lake, or the Corning area of Saskatchewan:

You have to love a lady who has this sense of humour…at least I assume she had something to do with the caption on her niche.

My addiction of late has been genealogy – tracking down my distant relatives from the past, anything I can find on them (which isn’t a whole lot).

This partially accounts for the lack of posts to this blog, but really only the last year.  I cannot account for the previous four years lack of posts.

Here’s another interesting caption on a nearby niche.

These are the Materi’s, late of Medicine Hat.

I might even be related to these people, woudln’t that be fun.

Back to hunting ancestors…..

It’s not about the number on the scale

Maybe I need to take that same advice when it comes to my inbox.  Right now I’m at an even 200 messages in my work inbox.  My home inboxes are even worse thanks to the fact that the iPad does not synch up properly with gmail or hotmail when deleting messages from my iPad (my primary home-use device).

I use my inbox generally-speaking, as my “To Do” list.  If something is sitting in my inbox it’s because I haven’t finished dealing with it yet.   I used to be obsessively organized by moving “To Dos” from my inbox to my actual Task List so that I could remove the message from my inbox.  But that kind of hyper-organization takes  a lot of valuable time when you’re getting close to 100 actual messages a day (not including back & forth conversations).

I was in my happy place if I could keep my inbox at 15 messages or less.  It was a visual feel-good because I could literally see the end of my inbox  denoted by the white space at the end of the list of messages in Outlook.  I had a little breathing room.

It’s been a long, long time since I’ve seen less than 15 messages in my mailbox.

Today it occurred to me that “it’s only a number”.  Do not obsess about it any longer.   My new goal is to try to keep the inbox under 100.  It’s my new “manageable”.  Still a little crazy but it’s a more attainable goal for me.  In some ways it feels like I’m giving up but I’m not, really, I’m worrying about what’s important instead of worrying about a number…

One of my beefs about calendaring and task software is the lack of integration between the two. I would like to be able to schedule a task for a future date but there isn’t a way to do this in gmail or Outlook or any other task tool I’ve used. The other obvious option would be to schedule the task directly into my calendar but my problem with that is I want the task to stay in my tasks until its actually complete because, I admit, I don’t always finish (or even start) a task during the timeframe I’ve scheduled it..

I want to be able to schedule a task into my calendar. Once that date rolls around I want the task to not only be in my calendar but remain as incomplete in the tasks menu until I’ve marked it as complete.

Sounds logical to me? Anyone got any ideas to help me with this organizational impedance?

We are blessed to live in an area of Canada where hummingbirds live all year round.  From what I understand, most breeds fly south once things cool off but one or two different types stay.  Its a joy to be able to watch them all year long!

However, once or twice a year our temperatures dip low enough that the bird’s main winter food source (hummingbird feeders) is threatened by freezing.  These little critters are so vulnerable that they may perish before they are able to find some non-frozen nectar to drink.

I put together this post to cover some things I learned about keeping the hummingbirds fed during a cold snap.

We’ve only had our hummingbird feeder for a year so I am still learning who all the regular customers are.  I sure hope that they all survive the shock of winter we are experiencing.

A question for the network geeks:

For the past month or so, every time I search for something on Google, Google asks me if I’ve moved.


No, I haven’t moved, I’m still in Canada (and plan on staying here).


My default search domain is google.ca and my IP is based in Canada so why does it ask me this question every time I search?


Did Google change something on their end because I haven’t changed anything on mine.


A little annoying……and disconcerting, too.

Like Loading...
I don’t spend a lot of time picking out a book to read but its got to grab me in some way because there are so many books to choose from.  Like the bumper sticker that laments “so many books, so little time…”

Some times its just the cover that makes me want to read it.  But usually I read the inside cover flap as well as the back cover to get a “read” on the book. 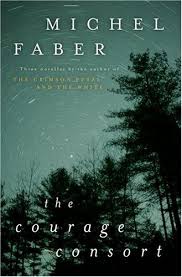 There’s not a lot going on on the front cover of Michael Faber’s “The Courage Consort” so I took a look at the back cover which stated “Faber’s writing is chaste, dryly humourous and resolutely moral.”   Sounds like something I could use right about now.

On page one, we meet Catherine:

“….she actually opened the window and sat on the sill, wondering if four stories was enough to make death certain.  She didn’t fancy the prospect of quadriplegia, as she hated hospitals, with their peculiar synthesis of fuss and boredom.  Straight to the grave was best..”

I dove right in.  So far so good.
~~~~~~
Update – I finished the book but it was painful.  It went so far downhill that I wasn’t sure if we were still on a descent  or wandering through a forgotten valley.  In the end, I never really knew what the book was about or what it meant to convey other than deep insignificance.

It started at a pretty young age – the boy’s love of duct tape.  To this day he has a rainbow of duct tape – all the colours of duct tape ever made.  Including camouflage.


This is some of his collection.

I remember when he was just little……I had asked him what he was up to and he replied “Looking for something to duct tape.”   Another time when a friend came over, I heard him ask if he wanted to go and duct tape something.


Hey, what can I say, he’s a smart & creative kid.  He even makes the odd bit of money here & there by making wallets out of duct tape.  Yes, he takes orders.

This tale contains a little bit of irony.

Sparrows have taken a liking to roosting right above our front door and above our driveway to sit, look around and poop.

Their droppings land not only on our front door step but also on top of our cars.

In an effort to keep the birds from roosting we fashioned little spike belts out of tin flashing and roofing nails poking at all angles up from the flashing. The spiky flashing is affixed to the top of a drain pipe where the little beggars would roost.

This seemed to ward them off….we had outsmarted them!

A few weeks later we noticed white droppings at our front door step again. They must have figured out a safe place to land beside one of the spikes.  Bummer.  Back to stepping around the droppings while we come up with another plan.

This morning, though, we got a good laugh when we spotted the little beggars building a nest at the end of the flashing. The spikes must have created an opportune place to grasp onto the nest structure for them. Rather ironic.

Back to the drawing board to find a way to keep these guys from roosting above our front door!

This is just wrong. Skulls on young children’s clothing?  This is in the girls section, too.  Not to generalize, but what kind of parents want their children in these clothes?  What statement are they making?  I know life isn’t all puppie dogs and pig tails but skulls are not necessary nor are they tasteful at this age.

Error: Twitter did not respond. Please wait a few minutes and refresh this page.